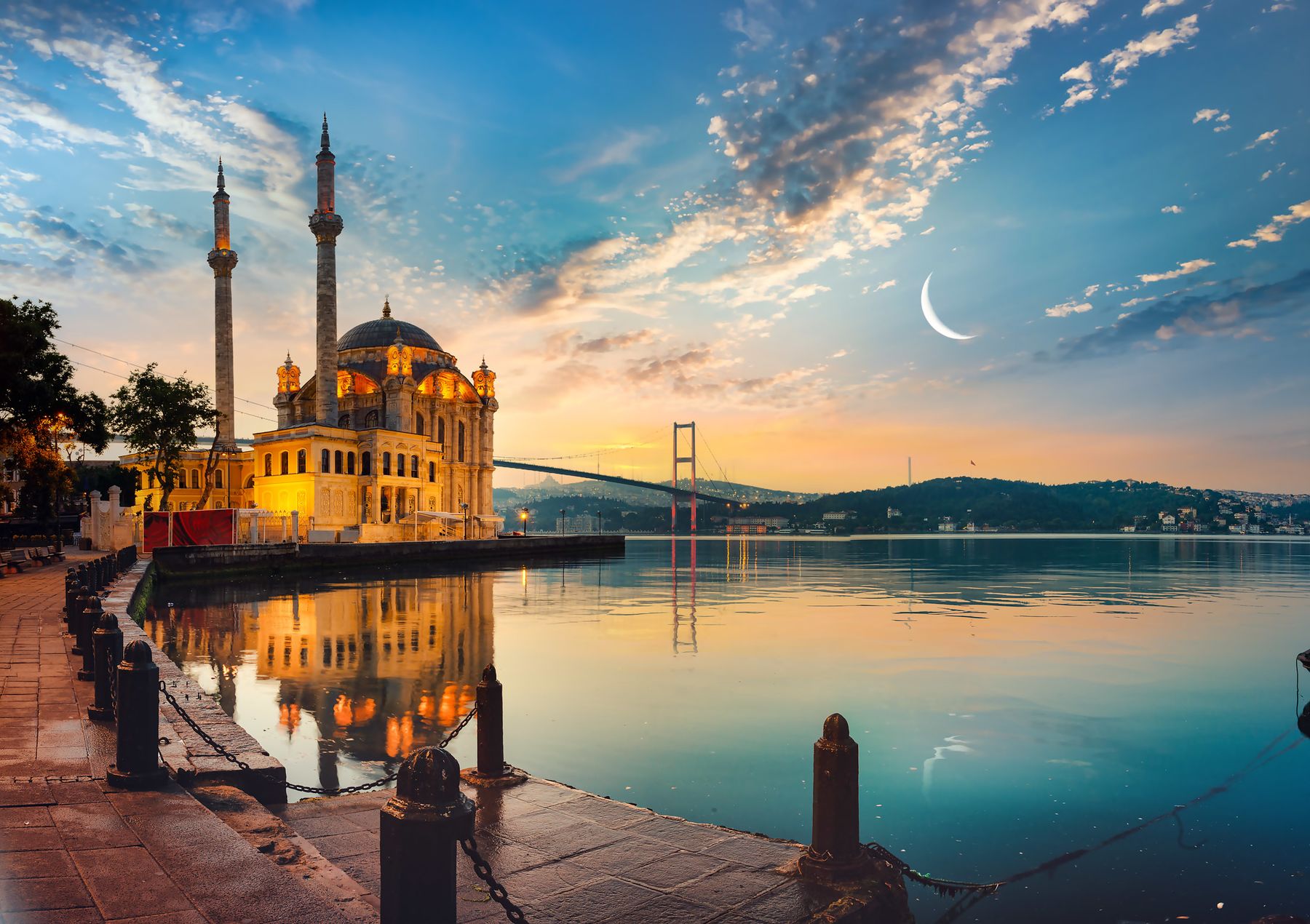 Historical, modern, traditional – it’s many cities in one! After all, that is what makes it charming: the unique way it combines European and Asian elements. Atmospheric on the one hand, with a mysterious veil of history, sounds and flavours, but with a modern character that is rapidly evolving on the other. Next to the mosques stand trendy international restaurants with top chefs, fine clubs and avant-garde galleries, next to the bazaars top international brands. Its energy spreads between the Keratian Gulf and the Sea of Marmara. Greek churches, the Galatas Tower, mosques, the Bosphorus bridges connecting Europe and Asia and abandoned houses with amazing architecture make up the facets of this multi-dimensional city. But its image in the 21st century is Istiklal Caddesi, which separates Galata from Taksim: on the one hand the modern, bustling Taksim Square with its trendy shops, cinemas and jazz bars (the centre of Beyoglu, the modern part of the city) and on the other Galata with its “tired” mansion facades, hamams, mosques and the strong elements of another era. There is also the strip between Ortakoy and Kurucesme, the place with the trendiest nightclubs and restaurants, where there is a parade of well-dressed businessmen and glamorous women. But also the galleries and modern art museums such as Proje4L/Elgiz, Istanbul Modern and Pera, which organise exhibitions of international interest.When to goWhen to goWhen to go Istanbul loves spring and autumn. Summer is hot and humid, and winter is charming, with the fog giving it an even more atmospheric look, but the cold is bitterly cold. Many Greeks also choose it to have a mystical Easter.

You do not need a visa to enter Turkey. An identity card or a new type of passport with Latin letters is sufficient.

The currency of Turkey is the Turkish lira (TRY). One Turkish lira is equivalent to approximately €0.20. Foreign currency can be exchanged at currency exchanges (Doviz Burosu) and also at banks.

+90. Specifically for Istanbul add 212 for the European coast and 216 for the Asian coast.
Useful phone numbers

Plenty of transport is available for your travel to Istanbul. From metro, train, trams and buses to sea buses and ferries. Note that the Metro runs for very specific distances, while buses and trams are more common means of transport.

For more economical travel, buy Istanbul Kart, the prepaid transport card. You will find it at kiosks next to central stations such as Eminonu, Sultanahmet, Taksim Square, Beyazit/ Kapali Carsi (Grand Bazaar) etc – the easiest way to find it is at Eminonu. Buying it costs TRY6=€1 and from there you “load” it with rides (www.turkeytravelplanner.com).

Be prepared, of course, as tourists’ istanbul airport taxi experiences in Istanbul are not so pleasant. For example, the driver may not accept you because the distance will seem too close, or he may direct you to your destination without opening the meter, drive you to the place you are heading, circling around to charge you more, etc.

It belongs to the top creations of Byzantine temple architecture, has a pioneering design and was a symbol of the city during both the Byzantine and Ottoman periods. Agia Sophia, or Agia-Sofia, was the Orthodox cathedral of Constantinople from 360 to 1453, with the exception of the period from 1204 to 1261, when it was a Roman Catholic church, while after the fall of Constantinople it was converted into a mosque until 1934 and is now a museum (Turkish: Ayasofya Müzesi). In addition to its architectural design, Hagia Sophia is also notable for its rich interior decoration, which was largely destroyed over time.

The Hagia Sophia is located in the Old City, Sultanahmet and there are usually queues to visit it. So make sure to avoid peak hours.

The Blue Mosque, or Sultan Ahmed Mosque, is the most beautiful and largest mosque in Istanbul, famous also for its harmony. It is considered one of the greatest masterpieces of Islamic architecture and was built between 1609 and 1616 by order of Sultan Ahmed I in the centre of the south-western side of the Hippodrome, deliberately opposite Hagia Sophia, so that it would dominate when ships approached. In fact, Ahmed I’s architect was instructed to spare no expense in order to create the most impressive and beautiful place of worship of Islam in the world, and the Blue Mosque is the only one in Turkey to have six minarets.

Built on a hill overlooking the Bosphorus, Topkapi is a palace that was the official residence of the Sultans of the Ottoman Empire from the mid-15th century until the construction of the Dolma Bahce Palace (1853). The former government centre has been a museum since 1924 and is one of the city’s most important attractions. In addition to historical buildings, its collections include ceramics, Islamic calligraphy, manuscripts, textiles, artefacts, sultan’s treasures and Islamic relics of great value. The Topkapi is part of the historic areas of Istanbul that are collectively listed as UNESCO World Heritage Sites.

This is one of the largest covered markets in the world, with millions of goods and over 3,000 shops spread over 61 streets in the Fatih district. Its construction began in 1455 and was completed in 1460, and in the early 17th century, it took its final form.

In the Grand Bazaar, in the heart of Istanbul, you will find lanterns and hanging pottery, carpets lined up in small shops, textiles and decorations, jewellery, souvenirs, spices, leather clothes, shoes and handbags and get lost in its labyrinthine streets to the sounds of merchants trying to entice you to shop.

Follow your… nose and visit the impressive Egyptian Market in the Eminönü district, at the southern end of the Galata Bridge, with its countless “pyramids” of spices from the East, special varieties of tea (buy rose buds for tea, green tea and tea blends), herbs and the famous Turkish loukoumi. Colours, smells and countless flavours will make you feel the true character of the city.

6. Cruise on the Bosphorus

The narrow Bosphorus Strait, the border between Europe and Asia, joins the Black Sea to the Sea of Marmara. The shores of the strait are densely populated, and two bridges connect its sides: the Bogazici Bridge and the Fatih Sultan Mehmed Bridge.

To enjoy the magic of the Bosphorus, you can either take a walk along it, in the adjacent parks and enjoy your coffee or lunch on the terrace of a local hotel, or board one of the boats offering stopover cruises and admire its beauty.

The Archaeological Museum of Istanbul ( www.istanbularkeoloji.gov.tr ) houses one of the richest collections of finds from the Hellenistic, Roman and Byzantine periods, while the rooms in which the sarcophagi found in 1887 in the necropolis of the kings of Sidon in present-day Lebanon are exhibited in excellent condition are particularly famous.

The Museum of Turkish and Islamic Art ( www.kultur.gov.tr/EN/belge/2-19977/istanbul—turkish-and-islamic-arts-museum.html ), housed in the palace of Ibrahim Pasha, Grand Vizier of Suleiman the Magnificent, contains more than 40,000 exhibits from the 7th to the 19th centuries. It has the largest collection of art carpets in the world, with unique Seljuk rugs, rugs and carpets from the 1400s, carpets produced in Anatolia and Europe in the 1600s.

The Principiponisia is a cluster of islands in the Sea of Marmara, south of Istanbul, consisting of 4 large islands (First, Antigone, Halki, Prince) and 5 smaller islands (Pita, Neanderthal, Oxis, Plate, Antirobios). On these islands there was one of the largest Greek communities in the city, where Greeks and other wealthy residents of the 19th century built many beautiful mansions. Particularly in the summer months, Prigiponisia is a popular excursion destination from Istanbul. There are no cars on the islands and transport is by traditional carriages and bicycles. They can be visited by regular ferry services from the main ferries in the city (Bostancı, Kartal, Sirkeci/Eminönü, Kabataş and Yenikapı).

On the European shore of the Bosphorus, stands the impressive Dolmabahce Palace, an old residence of the Sultans and the administrative centre of the Ottoman Empire from 1856 to 1922, with the exception of the period 1889-1909. Its construction began in 1843 and the cost of its construction was 5 million Ottoman gold coins, the equivalent of 35 tons of gold! It was the last residence of Kemal Atatürk, who breathed his last here on 10 November 1938. The palace has been a museum since 1960 and receives thousands of visitors every day.

The medieval, circular, stone tower located in the Galata district of Istanbul and dominating the northern side of the Keratios Gulf, reaches 67 meters and was built by the Genoese community of Istanbul in 1348/9. At the top there is a restaurant and cafeteria, with a panoramic view of old Istanbul.