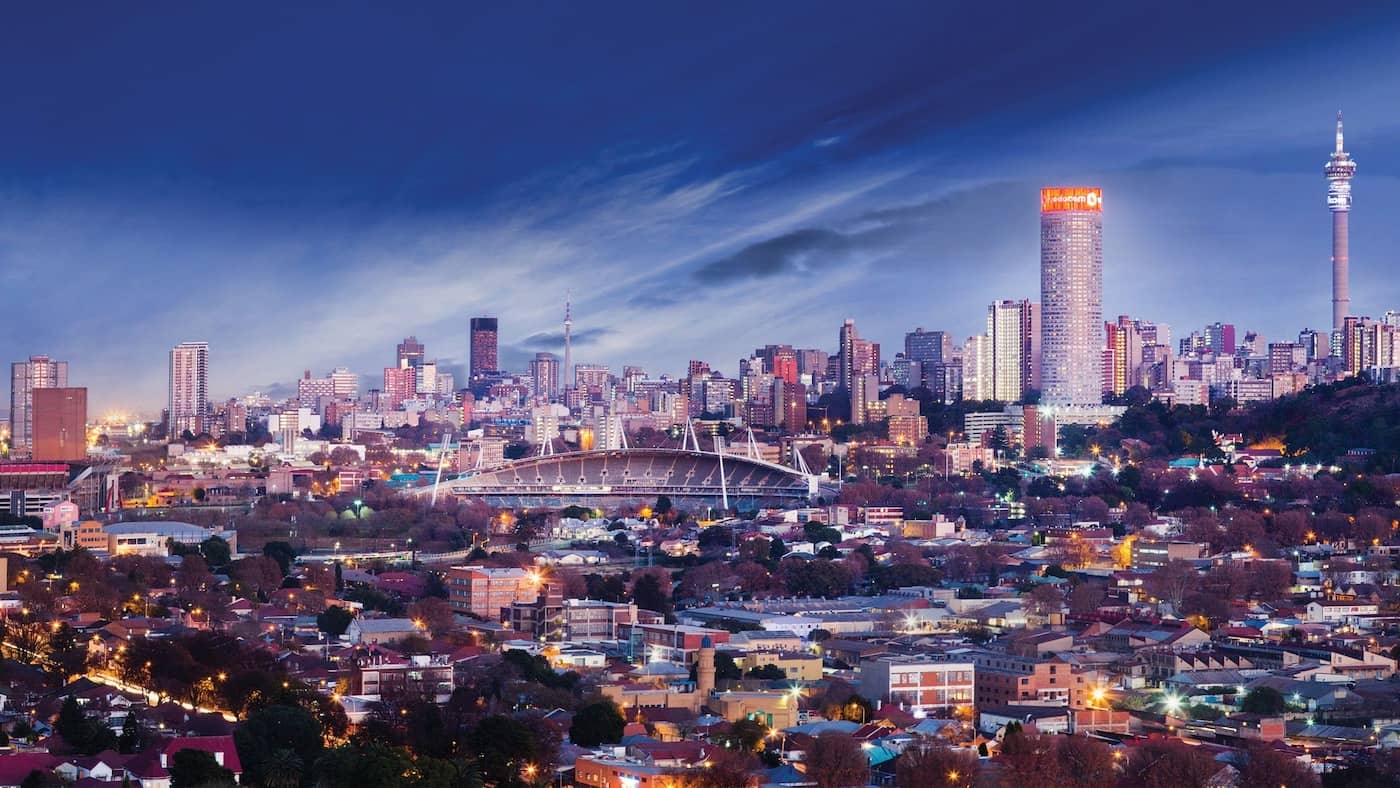 Johannesburg: The mirror of South Africa

One of the fastest growing cities on the “black continent”, Johannesburg is the “mirror” of South Africa. The skyscrapers, people, mines and slums of Soweto tell the country’s recent history, but with an eye to the future.

The city from which the struggle against apartheid began certainly has no claim to tourist laurels. But neither does it present itself as the rival to the dreamy Cape Town. Far from it, ‘black’ Johannesburg (which its people affectionately refer to as ‘Jo’burg’ or ‘Jozi’) is more famous for the crime one might encounter in certain areas of the city than for any of its attractions.

But this should not be a deterrent to not including the country’s economic, industrial and commercial capital in your South African itinerary. Just be sure to carefully select the areas of the city that you will walk around on your own, or arrange to tour the streets of Johannesburg with a group.

Whichever way you choose to experience the city, however, you’re sure to be impressed by the modern urban image of the so-called ‘Manhattan of Africa’, the largest metropolitan centre in sub-Saharan Africa. Skyscrapers, modern shopping malls, luxury restaurants and five-star hotels “speak” of a cosmopolitan metropolis that bases its economic prosperity and development on the exploitation of the region’s gold mines, which are the largest in the world.

On the opposite side, the ghetto district of Soweto (Soweto) – here dreams and future are unfortunately unknown words. Shacks made of wood and sheet metal, squalor, poverty, tragic living conditions, non-existent infrastructure… But don’t look away – look at Soweto. Because only then will you get a complete picture of Johannesburg.

On the opposite side, the ghetto district of Soweto (Soweto) – here dreams and future are unfortunately unknown words. Shacks made of wood and sheet metal, misery, poverty, tragic living conditions, non-existent infrastructure… But don’t look away – look at Soweto. Because only then will you get a complete picture of Johannesburg.

The city of gold

Occupying an area of 1,644 square kilometres and with around 3,226,000 inhabitants, Jo’burg is the largest and most densely populated city in South Africa. Built at an altitude of 1,750 m, the City of Gold is today the most representative ‘mirror’ of the country (in terms of its economic development and social structures), while playing an important role in the cultural life of the South African land.

The first inhabitants of the Johannesburg area were the indigenous Bushmen and Bantu, but they had not established any significant settlement. With the arrival of Europeans (British and Boers) in the 19th century there were no major changes, but the discovery of gold deposits in 1886 caused world-historical changes and developments throughout the region.

Predictably, the prospect of easy wealth attracted thousands of migrants and adventurers to this part of South Africa. The original settlement of labourers engaged in the extraction of gold deposits gradually expanded and developed into a thriving urban community, which at first became a suburb of nearby Pretoria.
Following an upward economic trend, Johannesburg soon became South Africa’s largest industrial diamond-cutting centre and the metropolis of the country’s economic enterprises.

At the dawn of the 21st century, Jo’burg remains the fastest growing city on the African continent and the most important centre of contemporary South African culture, thanks to a number of remarkable museums. With a European air and orientation, the world capital of the gold and diamond trade is a city unlike any other on the ‘black continent’.
In the commercial centre of Johannesburg

Dedicated to South Africa’s greatest historical figure, Nelson Mandela Square is one of the city’s most popular places to stroll, coffee and eat, while the eponymous shopping centre, with its dozens of branded shops, is the place to quench your thirst.

Continue exploring Johannesburg by heading to the suburb of Hillbrow. Here you can visit the open-air district market, the National Gallery and admire the city’s emblem, which is none other than the Hillbrow Tower telecommunications tower.

At 269 metres tall, it is the emblem of modern Johannesburg and can be seen from a great distance. Construction was completed in April 1971, but ten years later – for safety reasons – it was closed to the public. So you’ll have to settle for a photo of Hillbrow Tower from its base.

In the city centre (specifically in the Newtown and Braamfontein areas), modern architectural structures adjoin many well-preserved colonial-era buildings – the town hall being the most prominent of all.

Also take a stroll through the main Library Square and Mary Fitzgerald Square, as well as the Nelson Mandela Bridge, inaugurated by Mandela himself on 20/7/2003, just two days after his 85th birthday.

The statue of Nelson Mandela in the square of the same name. It weighs about 3 tonnes and has a shoulder span of 2.5 metres.

A traditional destination in Johannesburg is the densely populated ghetto district of Soweto, made famous by the uprisings of its inhabitants in the 1970s and 1980s. A symbol of the struggle against apartheid, Soweto was founded by mine workers who began arriving in the area when the first gold deposits were discovered. Here you can visit Nelson Mandela’s first house, now turned into a museum. For your safety it is best to bring a local guide or go with a group.

Just 8 km south of downtown Johannesburg awaits you in “Gold Reef City”, a town that is a recreation of the original settlement that existed next to one of Johannesburg’s first gold mines. It is a large theme park with old gold mines (a visit to the bowels of the earth takes about two hours), amusement parks, hotels, restaurants, theatre and of course casinos. It is considered the most popular entertainment and amusement area (for young and old) in the city.

A visit to the Apartheid Museum is the right choice to learn about the apartheid period (1948-1994). The museum’s 22 galleries contain a wealth of photographs, documentaries, personal items and artistic creations that tell the story of the darkest page in the country’s history.

Equally interesting is the African Museum (Museum Africa), which began operating in 1993. Here you have the opportunity to learn about the history of the “black continent” – from the Stone Age to the present day – through various thematic collections gathered in the seven halls of the museum institution.

The… Las Vegas of Africa

About 160 km northwest of Johannesburg lies the famous “Sun City”. Four luxury hotels, man-made beaches, casino gambling, golf courses and national parks with wild animals promise unforgettable experiences for visitors to Sun City. But more than that, it is the gambling fever that acts like a magnet and attracts thousands of tourists from all over the world. To get a complete picture of Africa’s famous “Las Vegas” visit www.suncity.co.za

The artistic heart of Johannesburg beats in the Newtown district, where the annual Newtown Festival is held. Theatrical performances, traditional dances, concerts and film screenings are some of the events that take place here every year from early June to the end of July. Interesting information can be obtained from the official website of the festival www.newtown.co.za

The Park of Lions

A short distance from Johannesburg (in the vicinity of the Lanseria Airport) you can visit the Lion Park. A large number of African fauna animals (lions, zebras, leopards, antelopes, etc.) are housed on an area of 2,000 hectares. For more information visit www.lion-park.com

For safe nightlife in Johannesburg, choose the Melville, Rosebank, Sandton and Randburg areas in the north of the city. The trendy clubs, restaurants and pubs here will provide the nightlife to suit you.

For a delicious dinner with local cuisine look out for the restaurants ‘Melville Grill’, ‘Lekgotla’, ‘Restaurant 41’ and ‘Bambanani’.

Johannesburg Airport is connected by air to Greece from Athens and Thessaloniki airports and to Cyprus from Larnaca airport.